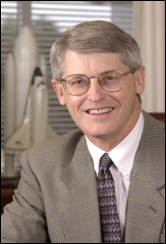 As Vice President of Research at the National Institute of Aerospace (NIA), Mr. Throckmorton is responsible for strategic planning and leadership of the Institute’s research programs.  NIA’s research portfolio encompasses activities that span the broadspectrum of aerospace technical disciplines, performed by resident staff, university faculty, and industry or government partners.

Mr. Throckmorton began a 37-year career with the National Aeronautics and Space Administration (NASA) at the Langley Research Center (1970-2000), where he served as a Senior Research Engineer, Assistant Head of the Aerothermodynamics Branch, and as Manager of the Space Transportation Programs Office.  During his tenure at Langley, he performed hypersonic wind-tunnel tests of    candidate configurations for the Space Shuttle, and was one of NASA’s principal interpreters of flight data from the Orbital Flight Test missions of the Shuttle Columbia.  He also served a tour-of-duty at Wright Patterson AFB as Director of Base Technology for the National Aero-Space Plane Program.

Subsequently, Mr. Throckmorton moved to the NASA Marshall Space Flight Center where he served as Deputy Director of Engineering (2000-2003).  In this position, he led a large, multidisciplinary workforce engaged in engineering design, analyses, development, and testing in support of the broad array of NASA space flight programs, to include the Space Shuttle and International Space Station.

From 2003-2007, Mr. Throckmorton was Deputy Director of the NASA John C. Stennis Space Center.  In this position, he was responsible for coordination of all of NASA’s rocket propulsion test capabilities (including all testing of Space Shuttle Main Engines), Stennis’ roles in NASA’s applied sciences programs, and executive management of the Center.

Following his NASA career, Mr. Throckmorton served as Chair of NASA’s Standing Review Board for the Orion Project.  At key project milestones, this body provided NASA management with independent review and assessment of the technical and programmatic status of the project.  He also performed independent strategic planning and business development consulting services for a variety   of aerospace-related business clients.

Prior to joining the NIA, Mr. Throckmorton was employed by Northrop Grumman at the NASA Langley Research Center, as Program Manager for the Technology, Engineering, and Aerospace Mission Support (TEAMS2) contract, which provided engineering support services spanning the Center’s broad Research and Development portfolio.

Mr. Throckmorton earned Bachelor of Science and Master of Science degrees in Aerospace Engineering from Virginia Polytechnic Institute and George Washington University, respectively.  He is the author or co-author of more than 50 technical publications.

Mr. Throckmorton is a Fellow of the American Institute of Aeronautics and Astronautics.  He has been the recipient of numerous awards, to include: the Presidential Rank of Meritorious Executive, the NASA Outstanding Leadership Medal, the NASA Exceptional Service Medal, and the Astronauts’ “Silver Snoopy” Award for contributions to the safety of human spaceflight.